How to cut Spanish Ham

There are certain arts in a Spanish kitchen that do not come naturally to the non Spanish.

One of them is the cutting of Iberian or Serrano ham using the traditional device, a Jamonera. 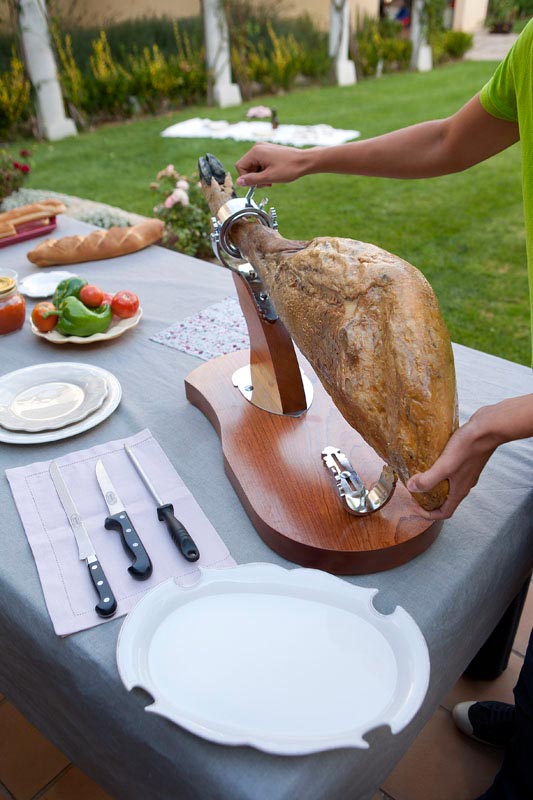 I have written about this object in the feature on Kitchen utensils.

Many Spanish people are very proud of their Jamonera.

In provinces such as Extremadura and Castile there are competitions dedicated to cutting ham.

Cutting Spanish ham is a skill in its own right. Practice, practice and practice. And here's how.

Firstly, how you place the ham on the Jamonera is dictated by how soon you plan to eat the ham. If you intend to eat the ham straight away then it is fixed to the jamoenera via a clamp, with the trotter facing upward.

If you are not planning to eat the ham just yet, then the trotter should be face downward and it should be 'opened up' along the narrowest side of the ham, cutting parallel to the bone. When you do come to eat the ham then it is this part that should be carved and consumed first as it will have dried out.

First remove the rind and excess fat with a strong knife. A layer of fat as thick as a finger should be left on the sides so as to preserve the meat.

Then, using a long, narrow and flexible knife cut off wafer thin slices of the ham. Do this by following the grain and the shape of the bone. Expect to see a dew like film of sweat form on the surface of the freshly cut slices of ham. Begin each cut at a point where the ham is covered by its own fat. But only a limited amount of fat is cut off so ensuring the ham does not dry out too quickly.

The nearer you get to the bone the more precisely parallel to it the cutting must be.

Now comes the harder work. Larger slices of ham are cut from the haunch. This requires skill and strength. The rind and the fat are very thick on the haunch. Remove the surplus fat from it. There will be more and more fat, and less ham, the closer you get to the bone. Be careful, your knife should not make contact with the bone.

You can remove the fat from the hip of the ham and keep it for other cooking purposes, including for stews or for when roasting meat.

The parts of the ham to the side of the hip should now be cut up further.

Your ham on the Jamonera will now be looking very thin indeed. But you should still cut off the meat that is directly along the bone. You will find some ham concealed here under a layer of fat and rind. This will be the most matured ham you will cut and taste.

When there is truly nothing left on the bone, use that itself for making a tasty stock.

Spanish chefs and cooks are very adept at wasting very little and using almost every part of a ham or pig for cooking.

I don't have the patience to cut ham as my neighbours do with such panache and pride. And I certainly don't have the expertise of friends who are chefs.

But if you really wish to impress your Spanish neighbours, take time to practice your ham cutting skills. They will tell you that you are cutting the ham too thick. But at least you are showing that, like them, you want to master one of the fine arts of culinary Spain.

Did this answer your question? Thanks for the feedback There was a problem submitting your feedback. Please try again later.